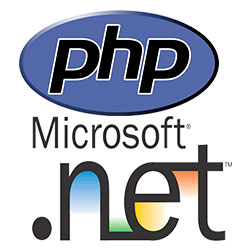 So you’ve decided to build a website but first things first what language will it be written in? Coding language is the form of programming the site will be built on i.e (HTML, PHP, etc) in this case lets say your talented in both PHP or ASP.NET whats better to build the site or for that matter your deciding which of the two to learn to start your website.

First off lets look at each individually starting with PHP. PHP is a server side programming language it’s commonly used with databases and works well with files on servers. PHP is commonly built alongside HTML, CSS, etc. More off this is a commonly learned language as the range of tutorials on the web are very large not to mention cost of servers for hosting PHP are more affordable and or make shift ways to run your own like a program like “easy php”. Many popular software on the web uses PHP to run like Joomla, WordPress etc. Generally PHP is made of functions and statements. It executes code within its delimiters anything outside that will not be processed.

Looking at asp.net it’s a web-app framework developed by Microsoft so the branding and funding is definitely behind it. Allowing programmers to build sites, apps and services. ASP uses web forms known as .aspx extension files. Focusing on things like user controls and custom controls . ASP.net itself runs a separate windows service that maintains and the current state of its variables. Released in 2002 coinciding with .NET framework 1.0 its fairly new in the development field and isn’t widely as known as PHP. Not to mention expenses are a bit more out there for ASP.net as the costs of development environments and things like windows server additions can run you up in hosting compared to servers offered for PHP.

So with that background knowledge in mind personally I’d say whatever your personally more inclined to learn and or already know. Different languages each have their advantage. Though as a practical view point I’d say PHP has much more resources available to pick up the language and mess around with. Home server hosting is free with select software and if your looking to go to business hosting etc costs compared to that of ASP.net. PHP is a language that easily coincides with that of HTML and CSS seeing as those are more basic languages that you pick up at the start of your web development career if your looking to start from scratch and design a site I’d say PHP is the way to go as it just follows along with your learning process. Not to say that you can’t just jump ship to ASP.net. Overall they have pros and cons over each other I just view PHP as a more practical solution to start off building your site with.